Of all the things Arreon Harley-Emerson gets to do, the thing he most loves is teaching.

“It’s a relationship,” says Harley-Emerson, the director of music and operations for the Choir School of Delaware, who also serves as the Delaware Arts Alliance board secretary and chairs its Advancement Committee. “I love seeing people ‘get’ it. Witnessing it is amazing. I love breaking things down, and teaching hits all the boxes. I love teaching music because it allows me to talk about equity and justice.”

Harley-Emerson authored a newspaper column in 2020 that featured the hashtag #PhilanthropySoWhite that discussed a lack of diversity, equity and inclusion in a sector dedicated to social impact.

“When I wrote it, I feel I already had the respect of my colleagues and the philanthropy sector,” he says. “It seemed to be a wake-up call for people who want to be better but don’t know how. I think it served as a reminder that you can support organizations financially, but that donors also need to be accountable to looking through the lens of equity and justice.”

Harley-Emerson says he’s known from an early age that he had the power of change.

“At Goucher College, I was part of instituting the first-ever gender-neutral housing,” he says. “What I learned is if you are credible, hard-working, intelligent and committed, you can make change and be forceful and be heard.” 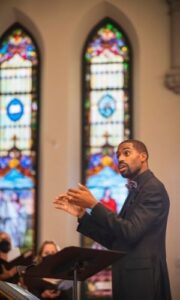 Harley-Emerson considers himself “lucky” that he gets to do the things he loves.

“I am, by training, a musician and love the choral arts because it wraps up history, culture, music, poetry and all that,” he says. “I grew up a choral geek, but I also had a strong sense that you have to do what is right. People often ask that you look at justice over mercy. My view is that we could focus less on being merciful if we were more just. The freedom and liberation you get from the arts is what an equitable society should and would feel like.”

While Harley-Emerson would love to see the state invest even more in the arts, he does give “high marks” to how supportive Secretary of State Jeff Bullock, Deputy Secretary Kristopher Knight and New Castle County Executive Matt Meyer have been of the arts sector during the COVID-19 pandemic.

“They’re making a real effort. They truly understand the impact of the arts and the intentionality of arts education,” he says.

Enjoying the Benefits of Living in Delaware

Harley-Emerson loves Delaware because it’s small. “You can forge strong connections with each other,” he says. “It can be tough elsewhere to get meetings or make an impact.”

But he also talks about the benefits of living in downtown Wilmington, which he says has an unusually strong arts sector – with many venues and organizations located near one another. Delaware also has Winterthur and the Biggs Museum of American Art in Dover.

“I go to Christ Church in Christiana Hundred for inspiration,” he says. “I love walking the labyrinth and listening to the magnificent organ – it’s a great place to get ‘unstuck.’ I got married there in 2018 and then had the reception at the Delaware Historical Society.”

In fact, Harley-Emerson says his wedding was a great opportunity to bring family and friends up from his hometown of Baltimore to see the place he had raved about for years.

* What’s the pebble in your shoe – that thing that tends to derail you? There are never enough hours in the day. My brain works like an iPhone with lots of applications always open. That means I can take a lot of things in, but the downside is that you’re never really turned off so it can be difficult to get everything done.

* What’s the best piece of advice you’ve ever received? “No” means “not yet,” from former [Delaware Supreme Court] Chief Justice Norman Veasey, when I first came to the Choir School.

* Tell me some books that you’re recommending. Imagine: How Creativity Works by Jonah Lehrer; Post Traumatic Slave Syndrome by Dr. Joy DeGruy; Simon Sinek’s Start With Why; and Management in 10 Words by Terry Leahy.

* What advice would you give your 20-year-old self? Let the little things go. Don’t get fixated on the things that don’t matter.

* Do you have a favorite failure? I have not had a major professional failure, but I have learned from the small ones. You really don’t have to touch the stove to know that it’s hot. I’ve had many, many small failures. If you follow up on those and ask why you won’t have huge monumental ones.

* When you feel overwhelmed, get distracted or lose your focus, what do you do? I get cranky if I don’t do my morning workouts. My husband is such a clear, rational thinker, and I tend to be bold and want to push the envelope. When I stress about how to get to that big goal, he’s amazing at breaking things down and telling me it’s going to be OK.”