Delawarean Recalls the Movers & Shakers Who Have Shaped His Home State

On Sept. 15, 1953, Delaware’s elite gathered in Fournier Memorial Hall in Wilmington to salute two Delaware superstars: Ed “Porky” Oliver and Dave Douglas, the only two golfers from one state on the U.S. Ryder Cup squad. 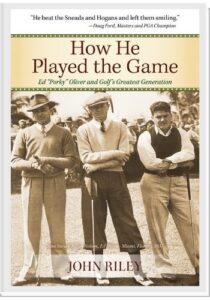 “It was the dinner of the year,” says John Riley, author of How He Played the Game: Ed “Porky” Oliver and Golf’s Greatest Generation. “The governor was there, and the mayor was there. Oliver and Douglas were going to England and playing as partners — two guys from little Delaware.”

The local paper, The Journal Every Evening, noted that “both have been in the big money class the past two years.” But Oliver was outpacing his friend in earnings. “For 25 years, he was Delaware’s celebrity,” Riley says.

Today, most Wilmington-area residents have heard of Ed Oliver Golf Club, located on the city’s edge. But few know about the gregarious golfer for whom it is named. Riley is seeking to change that with the recent release of his book, published by Faith & Family Publications.

It is not the first time Riley has brought Delaware’s movers and shakers into the limelight. With former Philadelphia Eagle star and Delaware resident Kevin Reilly, he co-authored Tackling Life: How Faith, Family, Friends and Fortitude Kept an NFL Linebacker in the Game.  Riley also wrote Delaware Eyewitness: Behind the Scenes in the First State.

Indeed, Riley has had a role in some of the state’s significant business undertakings. The many changes he witnessed are reflected in his books, which are odes to Delawareans and the forces that shaped them.

Initially, Riley wanted to chronicle the decline of Hercules, a chemical company with a Delaware presence that dated back to the 19th century. But the autobiography buff also wanted to chronicle the eras that influenced him and the state’s history, including the Vietnam War draft era. Delaware Eyewitness became a memoir and an insight into Delaware business and politics.

Riley mentions some 400 local personalities in the book. But few would argue that that author also has a past worth telling. He grew up with eight siblings in a 900-square-foot home on Wilmington’s East Side. Porky Oliver and his family lived down the street. Oliver’s son, Bobby, and Riley played on the same high school golf team. When Riley caddied at Wilmington’s Rock Manor Golf Club, players often spoke glowingly of Oliver as a hero.

Riley attended Salesianum High School and the University of Delaware. As a college senior, he was drafted and entered Army Infantry Candidate School. Fresh from the Army, he considered running for U.S. Congress, much to Joe Biden’s dismay. Biden, who was running for the U.S. Senate, felt the two twentysomethings would be known as the “kiddie candidates,” Riley details in his book.

Riley eventually did spend time in public service. He served on the New Castle County Council and as director of business development for the Delaware Economic Development Office, the predecessor to the public-private not-for-profit Delaware Prosperity Partnership organization.

Riley participated in significant business deals that changed the state’s economic landscape. In 1994, he helped engineer MBNA’s purchase of DuPont’s Louviers complex — golf course and all. Three years later, Riley was on the team that convinced AstraZeneca to make Wilmington its North American headquarters.

His roles put him in the eye of big business, and he joined Hercules when the company specialized in chemicals for paper processing. Riley was head of government and public relations at Hercules, and when the Ashland Corporation purchased and dissolved Hercules, he became the specialty chemical company’s director of government relations.

Riley also witnessed the transformation of DuPont, which merged with Dow Chemical in 2017. MBNA was later sold to Bank of America. But out of change comes progress. While AstraZenca has since downsized, the Wilmington campus now accommodates other major corporations, and soon it will have residential and retail space.

Those who cut their teeth in corporate banking and biopharma are making a difference in Delaware, Riley maintains. These sectors have subdivided, expanded and become entrepreneurial. In Delaware, biotech and fintech have emerged from pharma, chemicals and banking.

The state’s adaptability comes from the outstanding talent and intelligent people who live here, he says.

After detailing his experiences in Delaware Eyewitness, Riley’s thoughts drifted to the golfer Sports Illustrated had called the most popular man on the golf circuit. “He had a Pied Piper personality that people embraced,” Riley says. “They followed him and lived and died on his golf exploits his whole life.”

Porky’s portly body had earned him that nickname. But he had many others as well. “One golfer said if you called him by his real name, he probably wouldn’t have answered,” Riley says.

Delawareans, including News Journal sportswriter Al Cartwright, kept regular tabs on Oliver even after he’d moved from the state — and with good reason. Oliver won on the PGA Tour eight times and finished second in major championships.

In May 1960, Oliver was diagnosed with cancer and had a lung removed. He didn’t stay down for long – he was in a tournament by that fall. But after suffering a relapse, he returned to Delaware, where supporters, including President John F. Kennedy, raised funds to help the family. Oliver died in September 1961 at the age of 46. Olympian-turned-actor Johnny Weissmuller and Arnold Palmer sent flowers, and Bing Crosby, Ben Hogan and Sam Snead sent condolences by telegram.

When Riley was on the New Castle County Council in 1983, he and his colleagues, including now-Wilmington Mayor Mike Purzycki, successfully lobbied to rename the Greenhill Golf Club after Ed Oliver. Today, Riley is working with the city and the golf club management to tell Oliver’s story through photographs, trophies and other collectibles in the clubhouse.

At the event for Riley’s book release, not many of the 120 attendees knew the golfer personally. No matter. “They all had an interest,” Riley says. Purzycki and Governor John Carney spoke, along with former Phillie Phanatic Dave Raymond, motivational speaker Kevin Reilly, book advisor Don Kirtley and Tom Humphrey, the Delaware chair of the BMW Championship, which is coming to Wilmington Country Club in August 2022. There was an emotional moment when Oliver’s son and grandson addressed the crowd.

They were all on hand to celebrate a Delaware celebrity because he was a Delawarean. “It is,” an attendee commented, “a distinctly Delaware event.”

Book sales that night raised more than $1,700 for First Tee Delaware, a youth development organization that marries golf with a curriculum that builds life skills and empowerment. To purchase How He Played the Game, visit olivergolfbook.com.