For Yvette Santiago, the key to achieving diversity and inclusion in the workplace and in the nonprofit sector is “intentionality.”

“First, you need to ask who we envision in this seat or seats to reflect our goals,” she says. “Then, you need to look at your processes and practices to attract the workforce that meets or exceeds those goals.”

Santiago has been at Nemours for 17 years, currently serving as director of community engagement and also co-leading the Delaware Racial Justice Collaborative’s Public Policy Committee. She points to areas like revising job descriptions that often require a bachelor’s or master’s degree to focusing on experience and changing the approach to new-hire interviewing. With the latter, Nemours takes a behavioral approach, where candidates are asked to provide specific examples of how they have demonstrated certain behaviors, knowledge, skills and abilities that reflect their cultural competence.

She’s also been a vocal advocate for rules governing the setting of minimum percentage targets for diverse representation on state and local boards. “Boards govern and set policy, so it is incredibly important to have boards that understand the needs of and adequately represent the population they are serving,” she says.

But it goes far beyond that. Santiago says Nemours has started to expand on its pipeline recruiting and onboarding efforts. The hospital recently developed a partnership with nursing technology students from Hodgson Vo-Tech where they will complete their clinical rotations in the spring. Nemours is also assessing internally to create learning opportunities for current associates that will expand their career possibilities and potentially qualify them for higher-paying or more desirable positions.

“It’s important for professionals in the workplace to have a career pathway and ladder,” Santiago says, “and this enables job satisfaction and retention.”

At Nemours, she is a member of the Diversity, Anti-Racism, Inclusion, Value, and Equity (DRIVE) Taskforce and also co-chairs the internal Adelante group for Latino employees. Adelante is one of a number of resource groups at the hospital targeted at such constituencies as African Heritage Americans, the LGBTQ+ community and Asian Americans and Pacific Islanders.

“We’re trying to move every mountain that’s in our way, and that extends to my nonprofit work,” she says. “When we’re intentional, we can find the rockstars who are out there looking for an opportunity to show what they can do for the organization.”

Santiago describes herself as “100 percent Puerto Rican.” Her parents came to this area from Puerto Rico when they were about 17 years old for a better life and seeking higher wages. “I was actually born right over the line in West Chester,” she says, “and we moved to Wilmington when I was 5.”

She says her parents always stressed that education was the opportunity that could open many doors and that nobody could ever take it away. Santiago got involved in the community for a very personal reason.

“We had a number of family members that really were involved in either the criminal justice system or the social service system,” she says. “I saw very early on the struggles that they went through, whether it was through mental health, addiction, not being able to work for whatever reason. Many times, I served as the translator for my family, whether it was going to the doctor or going to court and learned very early on that they were treated differently, treated as if they were ‘less than’ because they didn’t speak the language.”

Santiago says she wanted to be able to help people like her family, to help the ones struggling with issues such as addiction and mental health and to help them figure out the system and understand the resources available to them. 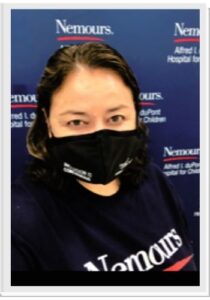 What makes your heart sing? Seeing communities that are thriving and seeing kids and families who genuinely are happy with where they are and where they’re trying to go. I work for the hospital. I’m not a clinician, but I know the work that I do helps to improve our systems and our policies and our ability to provide services to kids and families. When I see those families turning those tears into smiles and joy that their children are okay, that makes my heart sing.

I also have served as the president of the board for New Castle County Vo-Tech for the past seven years and have served in total for the past 15 years. I will tell you that every graduation, my heart is fluttering because to see kids graduating from high school and walking across that stage and families just cheering in the stands, it gives me goosebumps. I get emotional because I know there are so many kids that are not in that place, so many families that don’t get a chance to experience that.

The first word in your LinkedIn profile is Trailblazer. Talk a little bit about that.

Throughout my career, I’ve often been the only Hispanic female in the room. At Nemours, from a non-clinical perspective, I am the only senior leader that is Latina or Latino. It wasn’t always easy for me to amplify my voice at those tables because I struggled to convey the sentiment that needed to be said. My experiences, perspectives and knowledge were vastly different, and that is my incredible value. In other experiences, there were other Latinos in the room with me who understood the issues that our respective communities were facing. And you could see it made a significant difference in how we approached and sought to address issues.

Throughout my 30-year career, I have gotten so much better at elevating issues that need to be elevated. About 10 years ago, I decided that if I have a seat at this table, it is my responsibility to speak up about the issues that need to be brought to light. If I can’t do that, I need to step away and allow somebody else to have that seat at the table. Over time, I have realized that I have a level of influence that others may not have so if can help move the needle in the right direction, that’s what I want to do. So when I say “trailblazer,” that’s true because even today, I’m still, in many cases, the only Hispanic voice in the room, and I’m trying to blaze the trail for other Latinas and people of color.

At what point in your life did you realize you had the power of change or the power to do something meaningful?

It’s been gradual. When I moved into a supervisory role at Ferris School, I felt like I could create change. But higher-level leadership gave me the feedback that I probably needed to slow down a little bit. And so I learned that influence and authority had its opportunities but also had its limits. As I’ve come up the ranks and gained more authority and influence, I push the envelope a lot harder because of the seat that I’m sitting at. So it’s been gradual throughout my career.

I’m sure you receive a lot of volunteer requests. How do you avoid being stretched too thin?

Wisdom comes with age. I’ve learned to balance doing great things in the community with keeping my connection at home with my son and husband.

I recently accepted an invitation to become a trustee for the Delaware Art Museum. I’ve never really been into the arts, but I realized that that is a creative opportunity to reach our most underprivileged and vulnerable communities if they have not been exposed to the arts and all of the opportunities that offer that, as well as the connection to the vo-tech students and how we can create partnerships. From the perspective of Nemours, we have a lot of kids that sometimes need that type of activity in our hospital and figuring out partnership ways where we can bring the Delaware Art Museum into the hospital. For families that are at the Ronald McDonald House because their kids are in the hospital for a significant period of time, they can just go visit the art museum and get away from the heaviness of having a child really sick in the hospital.

My choices are based on how I can connect it back to the things that I’m doing every day. And how can I make sure that my participation is effecting the change that really does need to happen?

How do you want to be remembered?

What’s the question you wish more people would ask themselves?

Am I in the right seat?

What advice would you give your younger self? And what were you doing at the time?

“You are great, and you are worthy.” When I was young, I was extremely shy. For me, magnifying and amplifying my voice to the level that I do now is probably one of my greatest accomplishments. Early on in my career, people saw disagreement as you don’t like them or that person is really not part of the team. And so that’s what I would say. It’s okay to speak up as long as you do it in a way that is respectful.

What do you think is the biggest challenge facing Delaware?

We talk about The Delaware Way, which has historically been defined by very narrow perspectives. But that’s changing, and we need to keep evolving toward how new people coming into Delaware define it as being collaborative and because we’re a small state, we can work across counties and political affiliation to get things done. We now have a Black caucus in the legislature, a transgender representative. But we need more Latinos, and we’re moving in the right direction to truly represent all communities in the state.

What’s the pebble in your shoe, that everyday distraction that takes you off-course?

I think duplication of efforts. There are so many organizations and many of them are doing very similar things. We need to look for ways to eliminate duplication and silos and work together. The other piece of that is there are some organizations that may not be willing to collaborate because it might be a big content area, a big issue area. And they want to be seen as out in front of that particular issue.

Despair. Lack of hope. Sometimes when you see all that you’ve accomplished, you still see there is so much more to do. And when you see there’s so much more to do, you get that sense of despair and you start to feel that lack of hope like, “Are we ever really going to get there?” I know that in my career when I started, a lot of the things that we talked about 30 years ago, we’re still talking about today.

You’ve just been given a giant billboard. What does it say and where are you going to put it?

Who or what is inspiring you right now?

My son is 21 years old and is about to [get his degree from] Assumption University in Massachusetts. He’s a football player. He’s an EMT. He’s very focused on what he wants to do. I’m inspired by his youth and focus and by his enthusiasm for life. And I think I’m inspired by him because I know there are a lot of other kids that are in that very same place that he is. What inspires me is if I can continue to do what I’m doing and spread that across whatever platforms I can, then I think we’ll have more people in that very same place.

As I look back on my life, I say, “Not too bad for a Latina girl from West 23rd St. whose parents’ love and encouragement was unwavering.” My parents are my foundation, and I’m only where I am today because of the hard work and ethics they instilled in me. I will never forget where I came from. It’s what has made me who I am today.